Cashing in on the Philippines’ demographic dividend

I HAVE GLOSSOPHOBIA, the fear or anxiety of public speaking. As a result, my speaking style (or lack thereof) will often put people to sleep.

Therefore, when making presentations to clients, I sometimes try to engage with them by asking trivia questions. For example: In Japan, which personal consumer product is now bought/used by more adults than babies? The answer, in case you don’t already know, is diapers. Yes, due to its relatively old population, adult diapers outsell baby diapers in Japan. Some would be amused at this fact but, really, we shouldn’t because the underlying cause affects many countries in Asia: demographics. Due to steep declines in fertility rates after World War II, and especially in the ’60s and ’70s, the populations of Japan, China, South Korea, Taiwan, Hong Kong, and Singapore have aged dramatically. These states have fertility rates ranging from 1.1 to 1.6, well below the 2.1 needed for a stable population (excluding immigration). Consequently, Japan’s population is projected to fall by a staggering 39 million people -- nearly a third of its current population -- by the year 2065. In Singapore, the government has tried various inducements for couples to have more children to no avail. The influx of foreign skilled and professional labor has staved off a shortage of talent but there has been a backlash from ethnic Singaporeans who complain that the country is losing its identity. This begs the question: should the Philippines hitch its rising star to a powerful yet clearly vulnerable patron? China’s labor force began shrinking in 2012 and its population is likewise expected to start falling within a decade.

In a few major Chinese cities, the fertility rate is below 1 and thousands of kindergartens all over the country have closed. Without straining the imagination, it is quite possible that China will experience a “lost decade” similar to what Japan went through in the 1990s. The common denominator is the aging of the population which causes demand for products and services to change over time and, eventually, to slow dramatically as people exit the labor force in droves. The fundamental difference between the two, on the other hand, is that Japan was already a rich nation in the ’90s whereas economists doubt whether China can escape the so-called middle income trap before its population begins to shrink. Moreover, Japan has a very robust social safety net while China has a looming public pension system crisis which could make the effects of an aging population even worse for the latter. Nevertheless, only time will tell if the Philippines will be a net beneficiary of its pivot to China. The good news is that we are just entering our demographic window of opportunity; that period in a nation’s history when the percentage of its population in the labor force is at its most prominent. As a nation progresses through this time frame, expected to last over 20 years, the number of dependents (children plus elderly) per worker declines significantly. Therefore, not only will GDP per capita grow but Filipinos will have more money to spend on wants rather than needs. This is already beginning to happen. Breaking down last year’s GDP report, for example, shows that the fastest growing components of personal consumption expenditure (PCE) were spending for restaurants, entertainment, and recreation. Second, data from Japan’s tourism agency shows that the number of Filipino visitors jumped by over 200% between 2013 to 2016. Third, one of the biggest growth drivers for hospitals today are elective procedures, particularly those for aesthetic purposes. This list can go on but the trend is clear: discretionary spending is on an uptrend. This will continue to rise in the long term and benefit consumer companies. Still, investors should diversify and be discerning; not all of the listed consumer stocks are currently doing well. Recently, two of the biggest names in the sector posted lower recurring net income in the fourth quarter. Meanwhile, competition is intense in certain industries resulting in soft same store sales and/or falling margins. Inflation, on the other hand, accelerated to 3.4% last month from 1.1% a year ago and the proposed increase on fuel excise taxes and removal of VAT exemptions on many items will push this even higher. Most importantly, the fundamentals and prospects of each listed consumer company vary widely. For example, the labor department’s DO 174 will have a material impact on personnel costs for restaurants but should be negligible for retailers. Another point is that while many firms’ same store sales tend to grow in line with population growth plus inflation (e.g. department stores and supermarkets), a few have higher growth potential because of the Philippines’ changing demographics. One specific example is Wilcon Depot (PSE: WLCON). It recently went public but the reception has been lukewarm thus far. To some extent, the concerns are valid. As someone pointed out, people go to the mall every day but only a few times a year to a home improvement store. The pricing of its IPO was also perceived to be on the high side. The company, however, is benefiting from a major trend. The average household in 2015 was estimated to have 4.4 members, down 17% since 1990. Not only are women having fewer children but, because of higher disposable incomes and cheaper financing, more families are building or buying homes of their own. Household formation, therefore, has been growing much faster than population growth. Philippine Statistics Authority (PSA) data for the period 2010 to 2015 shows a 5-year CAGR of +1.77% for the latter and +2.64% for the former -- a differential of nearly 50%! This is why same store sales comparables have all been healthy at Wilcon, SM’s Ace Hardware, and Robinsons’ Handyman in the past year. With pure home improvement stocks in the region trading at ~28x earnings, WLCON should give shareholders solid returns over a long investment horizon. 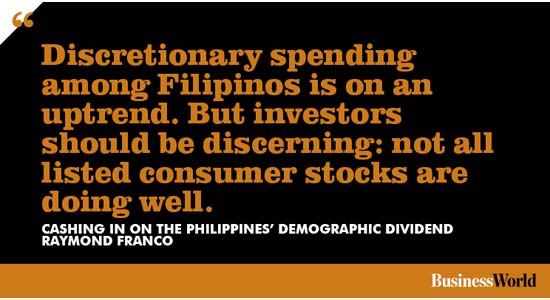