AS A STUDENT taking up accounting, I hated auditing theory.

More than boring, the subject often seemed pointless. If it were not a major component of the board exam, most students would have probably ignored it. There was one thing, however, that one of my board exam reviewers was able to drill into my brain. That is, CPAs need a very healthy dose of professional skepticism which is defined as “an attitude that includes a questioning mind, being alert to conditions which may indicate possible misstatement due to error or fraud, and a critical assessment of audit evidence.” Simply put, this means that numbers should not be taken at face value. In this regard, the Philippine Stock Exchange (PSE) has done a great job with the Bell Awards which seeks to promote greater transparency and improved corporate governance among publicly listed companies. Among others, the Bell Awards have encouraged many firms to disclose financial data and other material information in a more timely and exhaustive manner. China Bank holds the distinction of being the only five-time winner of this award while the Aboitiz Group, Manila Water, and Philex Mining are among those that have won it more than once. Despite the success, a lot of work still needs to be done. The level of compliance and zeal among PSE-listed companies in improving corporate governance is very uneven. One major corporation, for example, has not updated its investor relations page since 2013. Another kept reducing details from its quarterly briefings until the last broker covering it suspended its reportage more than three years ago. Professional skepticism, however, is not just for auditors and accountants. As an investment professional, and especially as an analyst, it has served me in good stead for the past 20 years. Early in my career, for example, I encountered a high-flying property company and its top and bottom lines were growing rapidly. However, unlike its peers in the industry at the time, its debts were piling up and free cash flow was negative. Despite its popularity, my call was to switch to another property company with a less risky profile. A few years later, the firm collapsed as the peso imploded due to the impact of the Asian financial crisis. The other company I told clients to switch into also lost a lot of value but at least it never needed corporate rehabilitation. In another case, despite the hype surrounding the new government’s infrastructure program and the positive outlook touted by management, we declined to put a subscribe rating on an initial public offering (IPO) last year. Although some investors did profit from this IPO, the stock is now down more than 30% from its initial offer price as the industry’s competitive environment has deteriorated. Until now, we have not turned overweight on infrastructure stocks. There are significant doubts that the first tax package submitted by the DoF will be passed into law largely intact or on time. And even if it is, implementation is unsure given that property and construction firms themselves have been complaining about a shortage in skilled labor since early 2016. So, whenever asked for advice by retail clients, I tell them, among other things, to develop a healthy dose of curiosity and skepticism. For investors, this can be demonstrated in several ways. First, always take rumors and tips with more than just a grain of salt. Remember, those that spread such rumors and tips are often the ones that have the most to gain. To this end, the PSE recently circulated an advisory warning the investing public about an investment portal that is selling investment tips for P120,000 to P180,000 a year. Second, investors should realize that companies will often highlight only the positives in their press releases and quarterly reports. The negatives, on the other hand, are usually buried deep in the details. Whether it is done on purpose or not, what can happen is that the true picture does not become evident until much later. Recently, a conglomerate issued a press release touting that its net income last year grew by 80%. Unfortunately, management did not clarify that the amount disclosed was still gross of minority interests, distributions to preferred shareholders, and profits from discontinued operations. Excluding all these, the profit that actually accrued to common shareholders was just a fifth of what was proclaimed in the press release. Unsuspecting investors took the press release at face value and thus arrived at an earnings per share (EPS) figure that was quite overstated. Even Bloomberg used the wrong EPS until we pointed it out to them. At the other end of the spectrum, the Aboitiz, Lopez and MVP groups of companies (among others) always break down quarterly performances in detail and present core earnings which gives a better picture of a firm’s true profitability. Lastly, investors should take the time to do their own research. It will not eliminate risk. Instead, research will arm investors with knowledge that will help reduce or manage risk. Research also gives insight into a company or an entire industry. Once a buy or sell decision is made after doing research, the profit or loss from a trade becomes truly one’s own. This will help foster discipline and responsibility and will ultimately help investors become more successful. 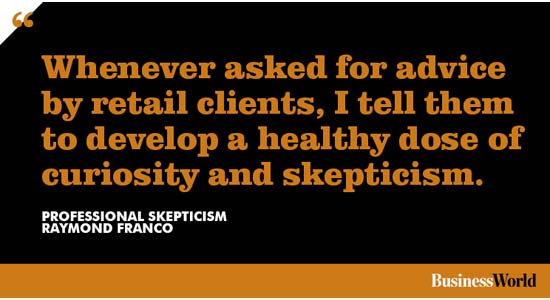