The January effect and other anomalies in financial markets

FINANCIAL MARKETS are full of quirks or anomalies.

In the US, for example, they have what is called the January effect. It is so named because many of the best performing stocks during the said month usually had the worst returns in the prior month. The theory is that fund managers sell (realize losses on) their losers in December to be able to claim losses for tax purposes. The selling causes weak stocks to fall even more which then sets them up nicely for a recovery in January of each year. This is not applicable in the Philippines but there are local anomalies worth noting. For example, the chart below shows that there appears to be more than a grain of truth in the adage “sell in May and go away.” From 1995-2016, the average return for the six-month period ending May 31 is 8.9%. In contrast the average return from June to November is negative 1.0%. Theoretically, therefore, one can take vacations for six months at a stretch and not miss a beat. Of course, trading or investing is never that simple. Friction costs would be substantial, there would be no assurance that you can buy (or sell) the stocks you want at prices that you would consider fair and past experience is not always a great predictor of the future. Anomalies can also occur due to foreign investment flows. Sometimes, we observe that a conglomerate’s stock price will diverge widely from its subsidiaries. To cite, JG Summit (PSE:JGS) has rallied 28% year-to-date (through May 8) on the back of large net foreign buying. In contrast, its major subsidiaries and affiliates, accounting for more than 80% of its net asset value (NAV), have only risen by an average of 8%. The disparity is so wide such that investors may be rewarded by rotating out of JGS and into its units; more so considering that the stock is already more than 10% above its consensus target price. In other cases, foreign interest is concentrated in only a few issues within a particular sector. In the property sector, for example, the majority of foreign buying and selling is focused on just SM Prime (PSE:SMPH) and Ayala Land (PSE:ALI). Partly as a result of this, these two companies trade at more than twice the valuation of its domestic peers. And then there are stocks that seem to defy gravity. Valuations are so steep such that traditional metrics or models appear pointless. Remember when the number of page views was used to justify share price targets during the dot com boom? Locally, there are a few counters with valuations that appear exceedingly stretched. Among them, Philippine Seven (PSE:SEVN) once traded as high as 100x trailing earnings and has averaged approximately 70x in the past five years. Growth has picked up recently but this valuation is still about 4x the market average during the same period and twice that of its convenience store peers in the region. In part, SEVN’s lack of liquidity appears to be protecting it from de-rating to more reasonable levels. However, this does not explain why other stocks with similar growth profiles do not enjoy the same lofty ratios. Another example is a very popular stock which is currently trading at nearly 200x trailing earnings (that is not a typo). The concerned company’s reported net income has been growing but if we exclude non-cash revaluation gains (to make it comparable with its peers), it would actually have no profit to speak of. Apparently, investors are looking forward to the time when management’s vision of several billions in profits becomes reality which would bring down valuations. However, the said target is still more than 3 years away. Moreover, the oft-quoted profit target, as confirmed in a meeting with top officials, is gross of minority interests and distributions to preferred shareholders. Therefore, even if this company can catch up with its roll out (slightly delayed based on earlier presentations), its stock would still be trading at well over 30x on 2020 earnings. On the other hand, fair value is relative and is often defined as the price a willing buyer and seller agree on. In this case, maybe it is not an anomaly at all. 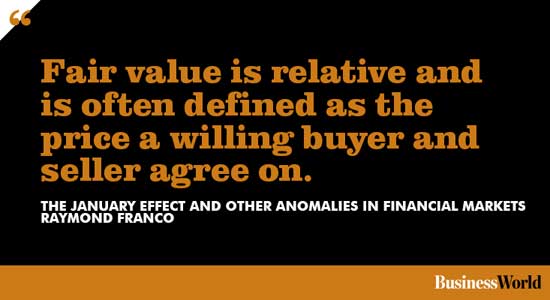