Saving The King Of The Road 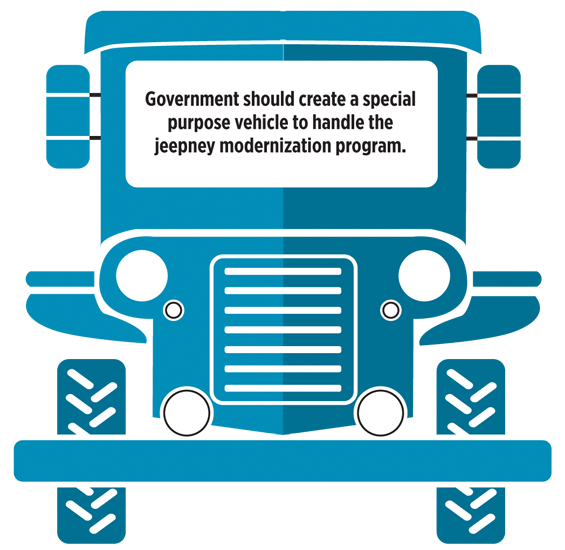 FROM the time I started elementary, until I was finally able to afford my own car, I rode jeepneys daily. I learned how to make sabit or hold on to anything at the end of one of these vehicles just to get home as quickly as possible.

At times it was fun (I let myself get soaked with rain a few times) but more often it was dangerous.

Once, I nearly fell onto moving traffic after the driver took a vicious swerve to avoid a collision. The constant exposure to dust, cigarette smoke, and vehicle exhaust also meant I often had respiratory ailments. Modernizing the jeepney, therefore, should definitely be a priority. The question, however, is whether we are going about it in the right way. From my point of view, there are at least three areas of concern.

First, the average price for a modern jeepney appears to be too steep at around P1.5 million per unit.

Assuming five rest days per month, drivers would have to net almost P800 per day just to cover the monthly amortization. The Euro IV compliant engines and the reduced need for maintenance (at least for the first year or two) will help boost incomes but, still, P1.5 million per unit is expensive.

An operator, for example, may be better off buying two Mitsubishi Mirages or two Toyota Vioses and use them as Uber vehicles.

Second, LBP and DBP, the two institutions tasked to provide financing, apparently lack the financial muscle to support the program.

Both banks have so far allocated just P1 billion each which would be enough for a total of less than 1,500 modern jeepneys or only 0.6% of the required replacements.

And even if the modernization is phased in over 10 years, these government banks would need over P30 billion per year to accommodate the demand from jeepney operators and cooperatives. The government, therefore, may need to inject fresh equity into both LBP and DBP to make the program viable.

Third, the steep amortization is likely to result in high default rates.

If the default rate on private car loans is about 5%, it is certainly plausible to expect a figure two to three or even four times higher for public utility vehicle (PUV) loans.

And since these PUVs will tend to depreciate faster than private cars and have lower resale values, we can estimate that by the time a jeepney is repossessed, its intrinsic value will be lower than the loan balance.

With LBP and DBP footing the bill on these defaulted loans, it will again be taxpayers who will actually be burdened. Moreover, if default rates go high enough, the capital ratios of LBP and DBP will deteriorate and their financial standing may become compromised.

Hunter S. Thompson once said, “anything worth doing, is worth doing right.”

To address the concerns mentioned above, my suggestion would be to incorporate a special purpose vehicle (let’s call it JeepCo) to handle the modernization program.

JeepCo will be under the Department of Transportation (DoTr) and would be given funding through the national budget. The major functions of this SPV are to be as follows:

1. Bid out the design, manufacturing and purchase of the estimated 270,000 units of modern jeepneys needed to replace the existing stock of vehicles plying the streets today.

Having one entity to do all these will enhance economies of scale, increase bargaining power and ultimately lower the cost for jeepney drivers and operators. One specific task of JeepCo is to negotiate a “cost plus” pricing for the entire fleet of modern jeepneys.

“Cost plus” pricing is prevalent in construction and manufacturing and limits manufacturers’ mark up to 5%-10%. This is likely to be much lower than the estimated 20%-25% profit margins for the jeepney models recently presented to the public from manufacturers like Mitsubishi, Isuzu, Foton, Tata, and others.

Nevertheless, one or more of these companies may be willing to sacrifice margins in exchange for a guaranteed volume of sales.

2. JeepCo will design several financing schemes that take into account the wide range of financial capacities of drivers, operators, and cooperatives.

Given that JeepCo would be a nonprofit, it should be able to lend at rates even better than the 6% being offered by LBP and DBP. Combined with the lower sticker price from cost plus pricing, the monthly amortization per unit can be maintained at P15,000 to P16,000 per month.

3. To ensure collection efficiency and compliance, JeepCo will also be responsible for establishing collection arrangements with various financial institutions (public and private) and non-bank financial intermediaries (pawnshops or remittance companies with nationwide presence).

The agency will also look into partnering with LGUs to monitor the performance of various operators and cooperatives and come up with intervention efforts for those falling behind in their payments. Lastly, JeepCo should also be imbued with all other powers that will allow it to fulfill its mandate.

Understandably, the Department of Transportation and other government agencies spearheading the push for jeepney modernization may not want to go back to the drawing board. However, taking a step back and reevaluating should not be considered a setback.

Instead, it should be seen as an opportunity to ensure that the program does not encounter another form of sabit, the kind that can, instead, sabotage a worthy and much needed initiative.